B-Girl Roxy is arguably the first lady of the Soul Mavericks crew. While other female members may have passed through, Roxy, real name Roxy Milliner, has risen through the ranks of the crew’s A-squad and battles worldwide, plus dances with recent Hip Hop International Crew world champions, Plague. 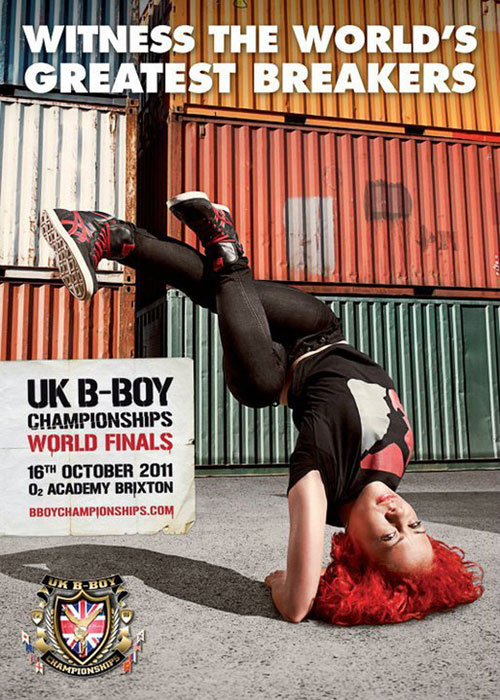 Being the only girl in the grew draws a lot of attention towards her as few UK crews can boast a female that has progressed as far as her within such a short time period. Is she bothered about all that attention or being seen as a role model for b-girls?

“Not really, I just like being on the poster! It’s an honour for me every time I’m on it,” she laughs. “I don’t think I’m good enough to be a role model yet but I hope to be one day. I think I’m a role model to people that are not really in the game.”

She adds: “I don’t think it’s that big a deal that you’re a girl and you battle, I just think if you’re good you should be in a crew, if you’re not then you’re not.”

Roxy believes that it’s her coach, DJ Renegade, who is the reason behind her and her crew’s success.

“Renegade, our coach, travels.” she says. “Every weekend he’s in a different country learning off other b-boys, then we travel a lot as well, and we train hard.”

With Renegade’s mentoring and after overcoming her shyness as a young dancer has seen her rise to the top at an incredible rate. “Since I’ve been really little I’ve always been active – more active than most kids – and I was really flexible,” she explains. “As soon as I started back then I thought that b-girls sucked in general so I was more determined to be a good girl because of the ways that b-boys look at b-girls, so that motivated me a lot.”

After entering her first battle five years ago she’s discovered her winning attitude. Although she battles next to them when in her crew, Roxy, like other b-girls, has to put up with the stigma attached that she’s battling boys: Who wants to lose to a girl? Her solution is easy:

“When I’m battling a guy I’m like ‘Grr!!’ hyped so they get that feeling back. I act like a bitch so they want to battle me properly. I don’t like it when people stand at the side and clap, I actually like battling where you feed off each other.”

Roxy will be battling with the Soul Mavericks at the UK B-Boy Championships World Finals.

The UK B-Boy Championships 2011 takes place on 15-16 October 2011.
Tickets can be bought online via TicketWeb.

This site uses Akismet to reduce spam. Learn how your comment data is processed.

You may have missed

12 things we wished you realised about dance TV contests